Learn how to use the A-B Flight Mode Feature on your drone equipped with the E6 Agriculture Autopilot.

This flight mode is all about convenience and fast-planning! It is perfect for open fields that are generally square in shape. You simply record the closest and furthest point on the field (see the diagram below), and then tell the drone which direction you wish to continue (right or left) and the drone keeps flying those lines until you stop it. For example, in the photo below, we started at the right side of the field and then instructed the drone to fly to the left. The Swath (space between rows),  Altitude and Speed are all preset in your Settings. A-B mode is easy, fast and effective! 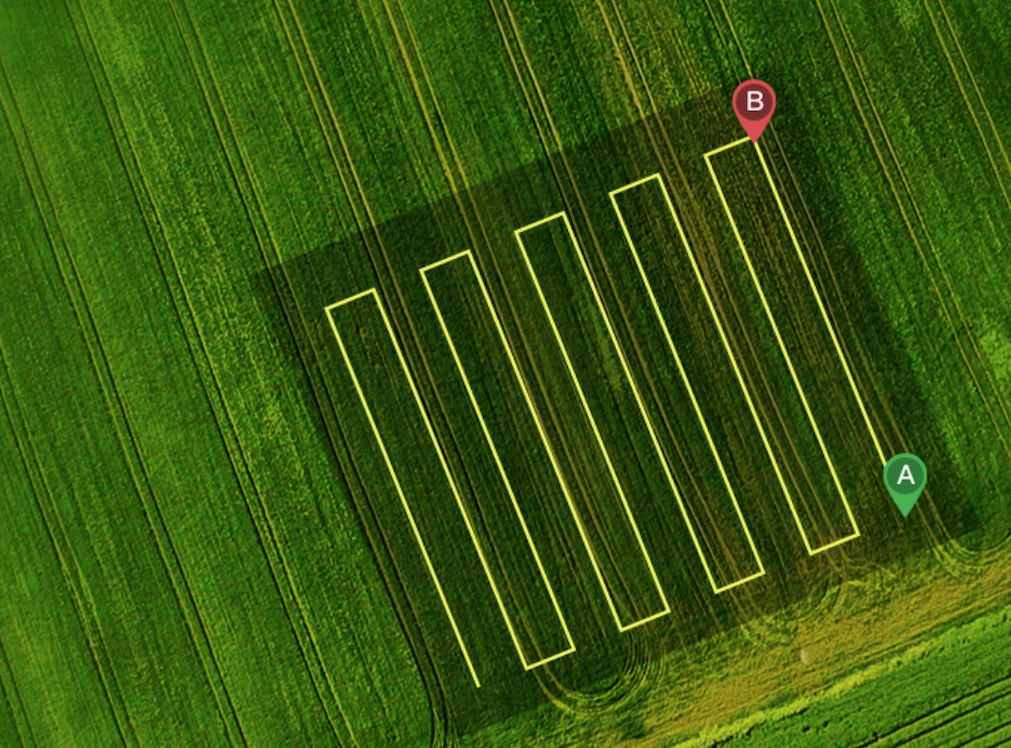 How to use A-B Mode:

After you've conducted your pre-flight checklist...
Confirm you are in GPS mode
- [ ] Pump off
- [ ] Toggle the A-B switch quickly on and off 5 times (this deletes the last A-B plan and the LED flashes red/green/yellow to confirm)
- [ ] Place A-B switch in the up position
- [ ] Launch and fly to the A point
- [ ] Move the A-B switch to the A position
- [ ] The tablet will say A point recorded, yellow LED will flash
- [ ] Fly to the B point at least 30 feet away
- [ ] Move the AB switch into the B position
- [ ] The tablet will say B point recorded, yellow LED will flash
- [ ] Set flight mode to Auto
- [ ] Set pump to Auto
- [ ] Move the right joystick to the left or right depending on which way you want the unit to go relative to the A.B. line.

To change the Altitude: generally this is managed by your terrain sensor (if equipped and switched on). Otherwise, you can manually increase or decrease the altitude by pushing the left stick up or down.

To Change the Heading (angle): press the left stick to its left or right to yaw the aircraft's heading... the flight path will be maintained, this will just change the position of the nozzles and head of the aircraft.

To Extend or Shorten the rows: